Can I make a living from sailing?

That’s a question many of us may have asked when the office walls start to close in on us.

And while some young sailors manage life on small yachts with almost no amenities aboard – there is a better way to do it.

Paul and Sheryl are still living their dream
Canadian couple, Paul and Sheryl Shard, set sail from Lake Ontario with a dream of sailing south when they were in their early 30's. That was nearly 30 years ago, and since then, they have visited five continents, crossed the ocean seven times and clocked 100,000 miles under the keel.

As independent TV producers, the couple is responsible for their very own successful production called "Distant Shores" from which they derive their income. The TV show has been translated into 28 languages and have been seen by millions around the world.

Paul and Sheryl have spent more than $100,000 on camera gear and editing equipment. The series is professionally scripted and filmed specifically for television.


Making use of modern technology
Modern technology has, however, opened new possibilities. A GoPro camera allows you to shoot above or under water, while drones enable you to shoot amazing aerial shots. Every island or marina has an internet connection of some sorts that will allow you to upload your videos to YouTube. And so your adventures begin!

Such is the story of Riley Whitelum and Elayna Carausu of La Vagabonde.


Realising his dream
Riley worked offshore on oil rigs and in the mines of Western Australia, saving every possible dollar to buy a half-decent yacht. When Riley discovered that yachts are half the price in Europe compared to Australia, he travelled to Italy in 2003 and bought La Vagabonde, a 2007 Beneteau Cyclades for roughly €73,000 – an absolute bargain.

Air tickets and the yacht survey set him back another $4,700 while some improvements to the yacht came at a cost of €15,000. His insurance cost was 3,000 AUD a year. When Riley picked up the yacht in Italy, he had only about ten hours of sailing behind his name. 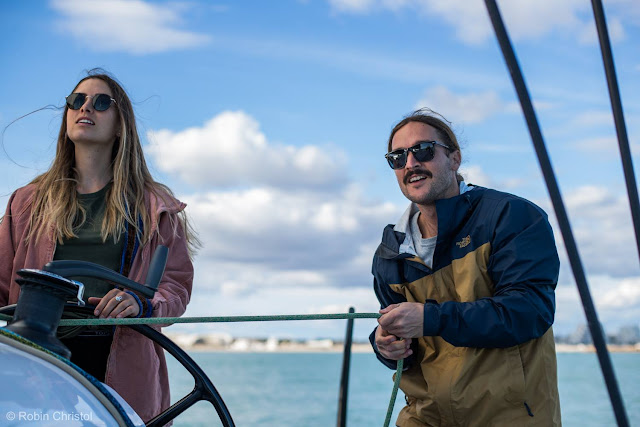 Meeting Elayna
Riley sailed to Greece when he met Elayna, who was working as a musician for a travel company. The couple fell in love and Elayna agreed to join him on his journey around the world. Elayna found Riley's unused video camera on the yacht and starting filming their adventures. When she wanted to post these videos onto YouTube for her friends and family, Riley was sceptical. After much convincing, he obliged. A friend then advised them to use Patreon, a crowd-funding site. Currently they have over 1,331 patrons on Patreon who donate from $5-$200 per episode with a current total for all their patrons at $8,917 per episode. They have uploaded 112 videos since October, 2014 (about four episodes every month) generating a substantial income. 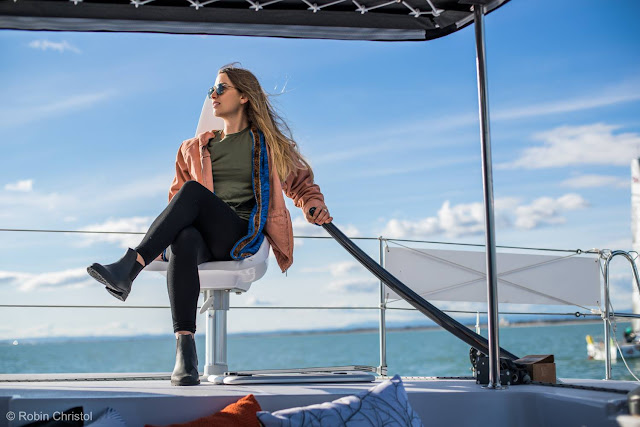 With the help of Patreon
Thanks to Patreon they have been able to continue their journey around the world, documenting their voyage and calling sailing their full-time jobs. This enabled them to buy new filming equipment, do repairs to their yacht and put food on the table. But most importantly, they have been able to remain independent, declining large companies and sponsorship deals whom they did not feel comfortable to represent. Says Riley: "Now this adventure and the entire project surrounding it are completely funded by the income we get from producing the sailing videos. Some of this comes from YouTube advertising, but most of it comes from pledges and donations. Straight from the people that enjoy watching the videos. Because of the support and love we’ve received, we are now able to fund our sailing and travels 100% and continue releasing our videos for free!" 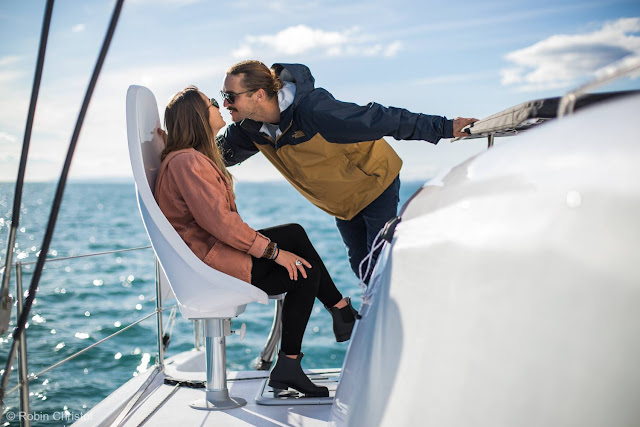 The attractive couple are both very spontaneous, fun-loving and interesting people who share both their good times and bad times with their audience. From tears after their dinner slid off the table on the floor or the pot full of spaghetti that tipped off the stove during rough weather – to joyous moments when they have crossed the Atlantic.

They are honest and frank and will admit when they messed up or don't know something. After watching their series you will soon realize that live on a yacht is not only moonshine and roses. That is why this story is such a success.

Brand-new Outnemer catamaran
The couple recently saw an Outnemer catamaran when they arrived in Venezuela and was extremely impressed. The owner of this yacht was working for the Outnemer company and he was also a keen follower of the La Vagabonde episodes on YouTube. He gave Riley the email address of the CEO of the Outnemer company and after much negotiation, Outnemer agreed to provide a new catamaran at a reduced price and take out a loan on La Vagabond's behalf which Riley and Elayna will pay back from the monies they receive from Patreon. Outnemer will obviously get much media publicity with this venture.

The couple have travelled over 31,000 nautical miles together now and have more than 270,000 subscribers with over 30 million views on YouTube. They have just received their $1 million OUTREMER 45 catamaran on the 4th of March 2017 with much media publicity in La Grande Motte, in the south of France.

About Outnemer Catamarans
The Outremer catamaran is a high-performance multihull cruiser, renowned for their seaworthiness and speed. More than 280 vessels have been built by the specialists yard in La Grande Motte, in the South of France and Outremer catamarans have won most Transatlantic and long distance races, which they have entered. The Outremer 45 catamaran’s twin, high aspect ratio daggerboards will outperform a racing monohull to windward. Her twin skegs placed just ahead of the saildrives and rudders, will protect them from impacts and also allow for safe beaching. The coachroof, which is shared by her larger sisters, sleek hulls and beautifully arched crossbeams remain the visual trademarks of Outremer catamarans. Amongst his many transatlantic voyages, Aeroyacht’s founder Gregor Tarjan not only owned an Outremer catamaran but has also sailed 3 Outremer catamarans transatlantic.

Book a private bareboat yacht charter with an optional skipper to experience the thrill of sailing for a week or more.

The author endeavoured to provide the user with correct and accurate information at the time of this writing (March 2017). However, despite these efforts, errors might still occur and the author cannot be held responsible for any errors or damages caused.
Posted by Royalty Blogger at 10:13